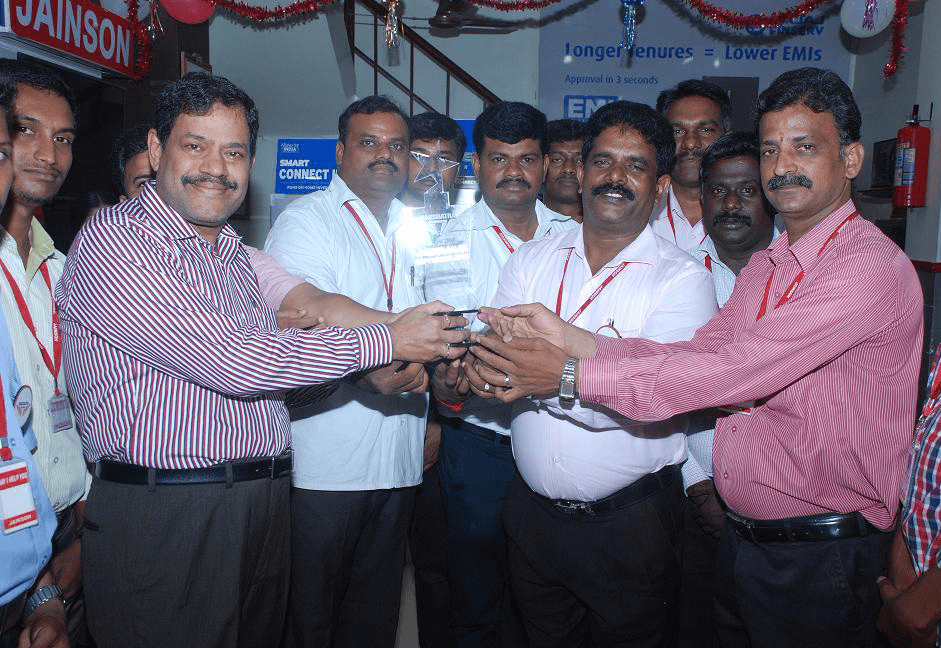 Fire in the Belly – Well that is what Mr. Antony Dass Assistant Branch Manager and Mr. Syed Safi (Assistant Branch Manager) of Jainsons Peramanur experienced when they attended the Annual Business Meet. A simple line up of all the showrooms that had won the Nakshatra Showroom Award till then,created a fire in them to win it for their branch. They make a promise to themself that they would be winners the next time.This self-made promise was shared with the team and the fire was transferred to them.

A determined team then worked hard to make this a reality. They decided to leave no stone unturned. Each and every customer who walked in to the store did not leave empty handed. Be it a service issue or a sale it was concluded to the satisfaction of the customer. This attempt at ensuing customer satisfaction resulted in them winning the award. They claim that this would not have been possible but for the support and encouragement they received from Mr. Murali (DGM – Operations, Rotn)

Mr. B. A. Srinivasa’s (CEO) presenting the award was the crowning glory for this team. It was a pleasant coincidence that they won the award during the Opening of the New Viveks Showroom in Salem. This further added to their moment of happiness. The team had a sumptuous lunch together
and the employees were given a shirt as a token of appreciation for the effort that they have put in for this moment of glory.

Grand Inauguration of the largest showroom in Salem October 28, 2019

Celebrating 50 Years of being part of your everyday Life. October 28, 2019